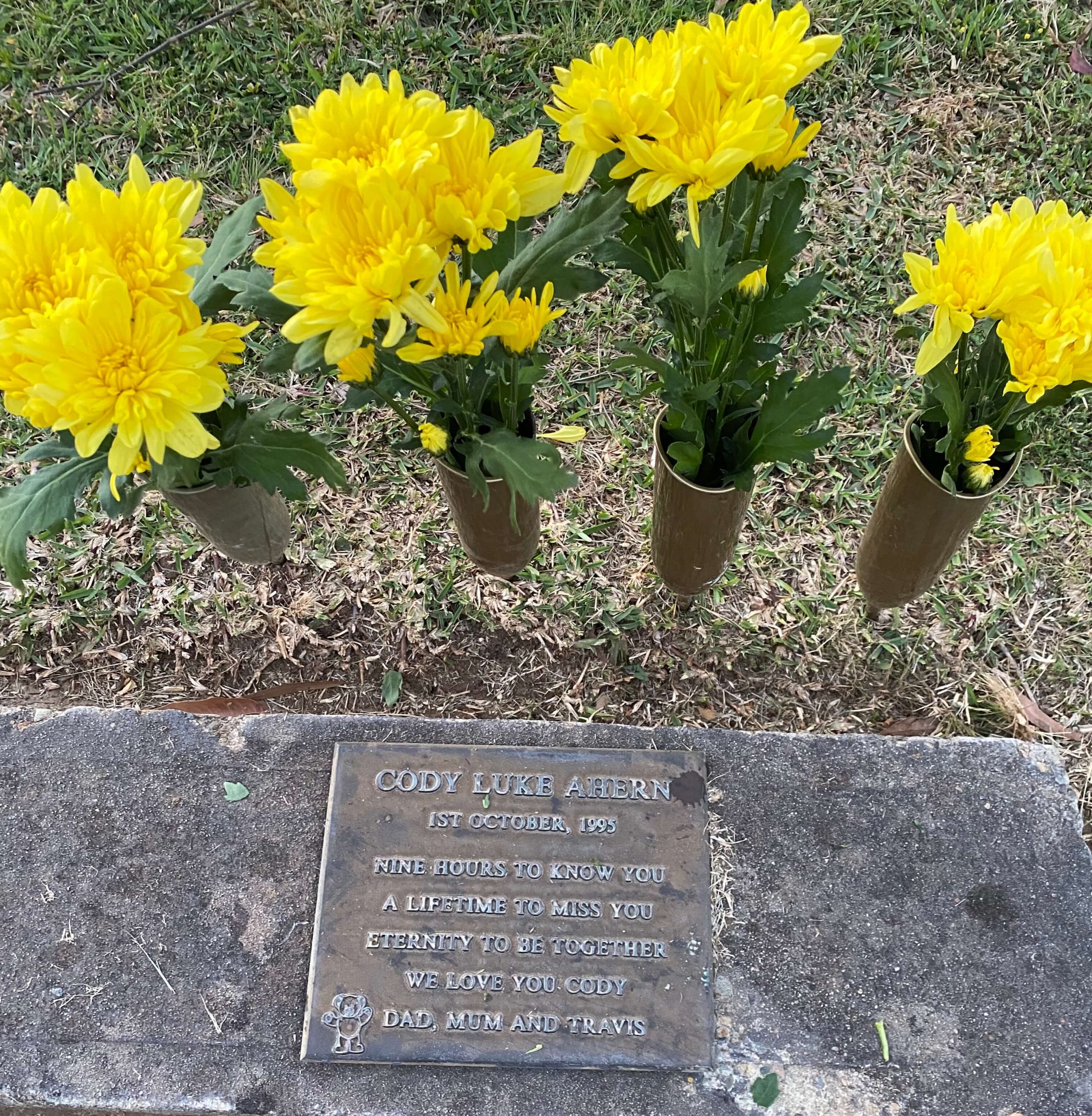 On this day, 25 years ago, my second son, Cody, died. He had lived for just 9 short hours but spent most of them on life support. To say our hearts were broken would be a gross understatement.

It had been a healthy pregnancy and my easiest delivery out of 5 babies, which is slightly surprising, given that he weighed in at 5 kilograms (that’s about 11 and a half pounds)!

Two weeks overdue, with an induction looming, I finally went into labour with the help of some castor oil (the thought of which still makes me heave! It is NOT a method I would recommend!). I held off calling the hospital until midnight because I was waiting for my favourite Birth Centre midwife to start her shift. That is one of many regrets I’ve had to learn to live with, as it was her gross negligence that led to his unnecessary death (as determined by a Health Care Complaints Commission inquiry process).

Cody was born breathing but was not given the care he needed after his umbilical cord ruptured during delivery. The big red emergency button, which would have had extra staff from the antenatal or labour ward immediately on hand, was ignored. For 2 hours.

He needed a bit of help with his breathing, and the task of “bagging him” with oxygen was given to my husband while the solitary midwife attended to my needs. The Apgar scores, which should have been taken at 1 and 5 minutes, were done about half an hour later, due to the aforementioned things going on when he was first delivered. The midwife wrote in her notes that the Apgar measures been taken at 1 and 5 minutes and gave him scores of 8 & 9 out of 10, with a 2 out of 2 for the respiratory category. The mind boggles.

I eventually showered, while the midwife finally took over Cody’s “care.” It was later discovered that she’d left him, alone, in a storage room on a warming trolley, while she sat outside smoking and writing up one long entry of clinical notes covering 2 hours of his life.

When he was finally taken to the nursery, she placed him down, opened his blankets and declared,

Those words have haunted me for 25 years.

The midwives and paediatrician in the neonatal intensive care ward tried valiantly, for hours, to save our baby’s life. The NETS (Newborn Emergency Transport Service) team were brought in to help and flew him by helicopter to the children’s hospital, but it was too late. He was unable to be saved.

And our hearts broke. 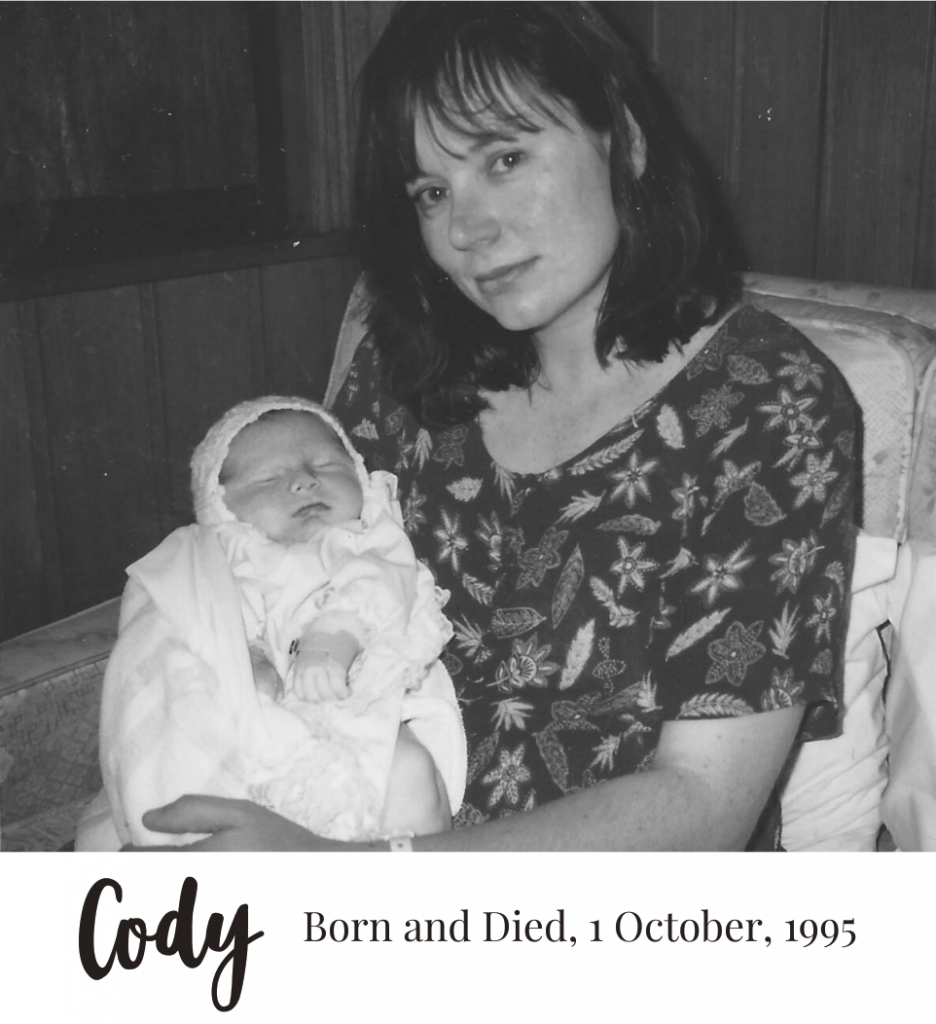 Over the past 25 years, I have learned to live again.

25 things I’ve learned along the way. 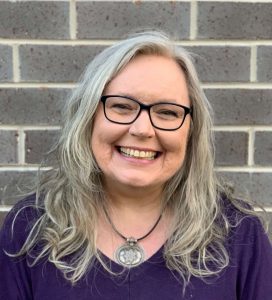 About the Author: Karen

Karen Bieman is based in Melbourne, Australia, and also works online. With a focus on grief, loss, and relationships, Karen works with her clients around issues of non-death loss, relationship endings, and bereavement. As an integrative person-centred counsellor with lived experiences of loss, grief and trauma, Karen is focused on creating a warm, welcoming, empathic space in which her clients feel supported, validated, and equipped to create a rich and meaningful life, moving forward, and understanding themselves better in the process.

Karen is a level 3 member of the Australian Counselling Association and is pursuing post-graduate training in grief, loss and trauma counselling. She is also an AOTT Qualified & Certified Online Practitioner TM.

We use cookies on our website to give you the most relevant experience by remembering your preferences and repeat visits. By clicking “Accept”, you consent to the use of all the cookies.
.
Cookie SettingsAccept
Manage consent

This website uses cookies to improve your experience while you navigate through the website. Out of these, the cookies that are categorized as necessary are stored on your browser as they are essential for the working of basic functionalities of the website. We also use third-party cookies that help us analyze and understand how you use this website. These cookies will be stored in your browser only with your consent. You also have the option to opt-out of these cookies. But opting out of some of these cookies may affect your browsing experience.
Necessary Always Enabled
Necessary cookies are absolutely essential for the website to function properly. These cookies ensure basic functionalities and security features of the website, anonymously.
Functional
Functional cookies help to perform certain functionalities like sharing the content of the website on social media platforms, collect feedbacks, and other third-party features.
Performance
Performance cookies are used to understand and analyze the key performance indexes of the website which helps in delivering a better user experience for the visitors.
Analytics
Analytical cookies are used to understand how visitors interact with the website. These cookies help provide information on metrics the number of visitors, bounce rate, traffic source, etc.
Advertisement
Advertisement cookies are used to provide visitors with relevant ads and marketing campaigns. These cookies track visitors across websites and collect information to provide customized ads.
Others
Other uncategorized cookies are those that are being analyzed and have not been classified into a category as yet.
SAVE & ACCEPT